On March 11th, 2011, the Great East Japan Earthquake occurred. Fortunately we were able to confirm safety of our members living in the affected region.

Fuel shortage was serious problem after the disaster. Under such circumstances, an Osaka-based company PITSUPPORT Co., Ltd. was preparing to deliver motorcycles for the use of relief activity, because he learnt usefulness of small motorcycles in disaster sites from his experience of the Great Hanshin-Awaji Earthquake in 1995, and thought this is the time to fully utilize value of motorcycles. WIMA Japan worked with the company and 1 GYRO CANOPY (Honda) was sent by WIMA Japan together with 3 GYRO CANOPYs, 1 GEAR (Yamaha), 1 JOG (Yamaha) by PITSUPPORT.

This activity appeared in the newspaper. Following is the translation of the article. 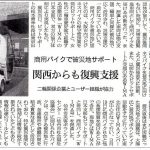 The Nirinsha Shinbun (used with permission)

More than two months has passed since the Great East Japan Earthquake occurred and many people in the motorcycle industry providing various assistances for the affected area. Among them, a Kansai-based motorcycle-related company and a non-business riders’ community cooperated together to send business-use motorcycles as emergency vehicles for relief activity shortly after the disaster. The motorcycles along with other machines sent from different routes are widely utilized in the quake-hit area to facilitate support activities.

This was achieved by the collaboration of 2 organizations; The PITSUPPORT Co., Ltd who provides maintenance and management service of business-use motorcycles in Osaka and Japan division of Women’s International Motorcycle Association which consist of female who loves motorcycles.

On the day of the earthquake hit, president of PITSUPPORT Takayuki Matsumoto encountered a jolt of the huge earthquake in Tokyo while he was working there. After he returned to Osaka, he found the serious damages on news and remembered how useful motorcycles were at the time of the Great Hanshin-Awaji Earthquake, then decided to transport business-use motorcycles to the disaster-stricken region. He also heard about supporting and encouraging messages sent from overseas members of WIMA to WIMA Japan from Keiko Osawa of WIMA Japan (resident of Kansai) and this gave him a push to move ahead with the plan.

Coordination was not easy due to communication system failure but Osawa and a WIMA member living in Tohoku area who already engaged in volunteer activity on-site worked together and the plan came true by transporting 6 business-use motorcycles and other relief supplies on March 19th. Member of WIMA Japan accompanied PITSUPPORT in transit and delivered “WIMA Canopy”.

Motorcycles delivered to Sendai City Disaster Volunteer Center (Sendai City Council of Social Welfare) are being utilized as valuable means of mobility among dotted shelters and volunteer centers. The bikes were effectively used as a communication tool especially when communication system disrupted just after the earthquake and tsunami. Four out of the six motorcycles equipped with huge container and were actually trikes, and these vehicles can be used to transport some relief supplies. Thus, they are now conveniently used by the local people. 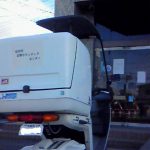 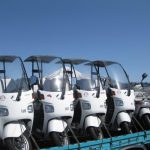 We also collected relief supplies when our Tohoku member came to Tokyo and she delivered the goods directly to those who need it. 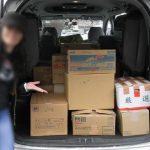 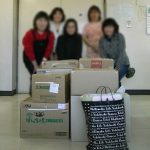 In addition to this, in Europe as well as in Japan, fundraising campaigns for the recovery of Tohoku region were carried out and the total amount of donations JPY 577,869 was sent to Miyagi and Iwate prefectures on June 3rd.

We wish for their earliest possible recovery.